Anyone on the lookout for the true and typical Spain and wants accommodation that pleasantly differs from the anonymous tourist ghettos on the coast should get to know the Paradores. These unique hotels are housed in historical, listed buildings, which are part of Spain’s cultural heritage. With much love and effort, they have been converted into modern hotels, many featuring original furniture. Their restaurants offer a refined regional cuisine, creating a charming contrast between old walls and a fresh interior design. In almost every one of Spain’s historical centers there is a Parador, be it in the famous towns of Andalusia, along the Camino de Santiago or in the countryside, in impressive palaces or castles. Here are a selection of the fascinating Paradores, great value for money and very stylish, historic atmosphere for less than 100 euro per night.

In the far south of Spain, the former city hall of the small town of Ronda near Málaga now houses the Parador of the same name (below). Tourists to Andalucia should not miss out on a visit to Ronda: its spectacular location on top of a rock plateau is simply breathtaking, just as is the Moorish historical town center. Behind its time-honored façade, the Parador de Ronda surprises with a light and colorful furnishing, full of Mediterranean charm, that surely will not fail to cheer up your spirit. 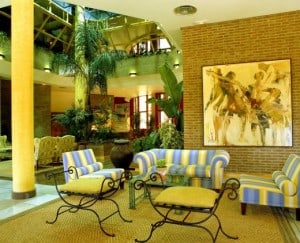