“Hot Summer Nights”, I suppose it depends on your age as to what images these words conjure up.Most will remember summers of their youth, carefree days in a simpler world. For those who moved to Spain it will be memories of the first summer spent in a new country, sat sipping ice cold sangria, and probably sweating in 30º+ temperatures.

Martyn Wood came to live in Spain in 1982, leaving a freezing cold Yorkshire in February. This DJ and concert promoter came to Fuengirola, contracted to create an American Style disco in the Hotel Stella Polaris. After the disco was created Martyn and his wife Nessie went on to open 3 different restaurants and remembers the “Hot Summer Nights” working as chef, “I had never experienced heat like it! But after a few years I realized I needed to get back into music and media, and leave the catering business” he recalls.

Martyn got involved with local English radio before setting up the first foreign language TV channel in southern Spain. After the channel was established he went on to create a video production company SmithWood Productions and supplied all local Spanish TV stations with 2 hours of English programmes a day for 5 years.

Recently Martyn decided to return to his live music days when Big M Promotions put on concerts in the Leeds/Bradford area of Yorkshire. “It was obvious that there was a need for more live music events, and in venues big enough to give a concert feel”, said Martyn, “So I decided to hire the spectacular Mijas auditorium and organise a concert to test the waters”.

The “Tribute to Pink Floyd” concert featuring Andy Claridge and Steve Nelson was a sell-out in June 2014 and was followed by a second sell-out concert in August, ‘Music of the Night’. “I knew this would be the start of something new for the coast, there are the bigger concerts held in Málaga and Sevilla, the new Starlite festival in Marbella, but those concerts are quite expensive for the average person to go to. I remember back in the 70s and 80s my concerts in Yorkshire featured tribute bands as well as local bands playing their own material. I charged 50p entry and had mostly full houses” Martyn recalls. “This formula still works well as the quality of tribute bands nowadays is much higher, and we are very lucky to have incredibly talented local musicians and bands”.

Martyn has launched his 2015 concert season, called “Hot Summer Nights” with 5 concerts, again in the atmospheric Mijas auditorium. “Hot Summer Nights are what I remember from last year’s concerts, during the day temperature in the auditorium reached 46º but ‘cooled’ in the evenings to a more acceptable 30º. It was just magical to sit in that warmth, sipping an ice cold beer and enjoying a concert under the stars” said Martyn.

“I knew that I had a successful product when, immediately after last year’s concerts I was contacted by businesses wanting to be a part of the 2015 season, and I am thrilled that IBEX insurance group are a major sponsor as well as insuring the events for both the public and the artists.”

More details can be found at www.costadeldisco.com Tickets can be purchased online and there is a Facebook page with all updates daily for “Hot Summer Nights”. 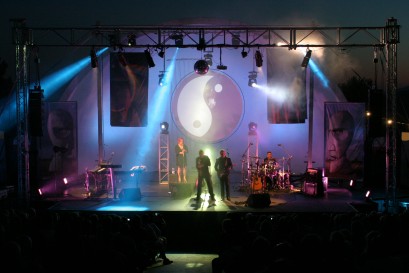